Reasons Why Dachshunds Bark All The Time

Dachshunds are high alert, anxious little dogs who love to bark.  Why do they bark all the time though?  A Dachshund’s bark can represent a feeling of excitement, playfulness, being territorial, feeling nervous, or even boredom.

It helps to understand the Real Reasons Why Dachshunds Bark All The Time in order to stop this unwanted behavior.

Ok, I admit it…my dachshund, Eko, had a barking problem.  Eko is the sweetest, most loving family dog, but he barked at everyone who passed by on our daily walks.  It needed to stop!

I did some research and found some ways to stop the bark.  These methods are really easy and they actually work. Too Much Barking Can Be Harmful

Dachshunds don’t give up easy, they could bark for hours without stopping.  Unfortunately, letting your doxie constantly bark can actually cause their larynx to swell.  So, it’s not only an annoying sound, it can also be harmful.

If your dachshund’s bark becomes hoarse, they will need to visit the vet.  Their booming voice box may be inflamed or have an infection.  Too much barking can lead to laryngitis, which can cause coughing, difficulty breathing, and swallowing issues as well.

Reasons Why Your Dachshund Is Barking

Now, don’t get me wrong, I appreciate my dachshund letting me know that someone is outside my house.  Dogs bark to communicate.

I’m not asking my dog to give up his natural way of communication.  It’s the constant excessive barking at other people that needs to stop.

First, we need to understand what is triggering the dog to bark.  From there, we can work on correcting the behavior in a positive way.

Dachshunds are hunting dogs, so they tend to bark a bit more than other dog breeds.  Let’s take a look at the origin of the Dachshund.  In the past, Standard Dachshunds were used for badger hunting and Miniature Dachshunds hunted smaller game, like rabbits and squirrels.

Dachshunds were bred to hunt, chase, dig, and bark…and they are great at it!

While hunting, the dachshund used their “super senses” to track down their prey.  They would chase the animal into their burrow, and Bark Very Loudly to let the hunter know their location.

So, you see, barking is a dachshund’s natural instinct.  They want to alert their owner what is going on…sometimes a little too much. 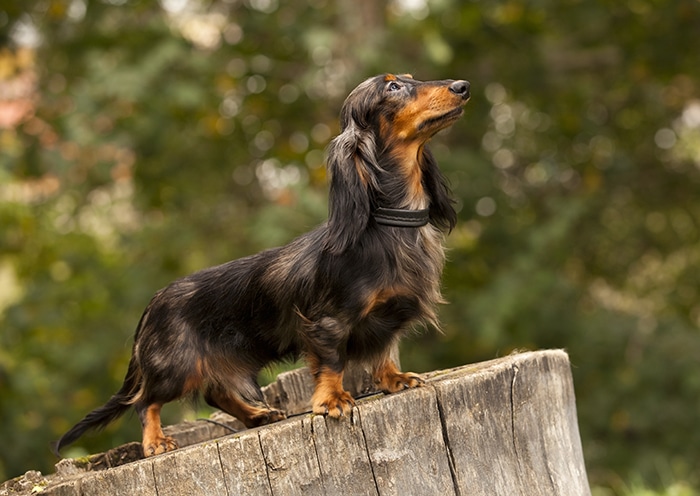 Dachshunds are very protective of their home, family, food, and toys.  When another person or animal approaches you or your dog,  they are considered a threat and ‘guard dog’ mode kicks in.  Unfortunately, this particular barking trigger is more aggressive.

My Dachshund, Eko, is very territorial when it comes to his toys and he is super protective of my kids.  He can’t stand it when they run ahead of us on walks, he wants them where he can see them.  He is very much a Bossy Doxie.

Remember, Dachshunds are hunting dogs with “Super Senses.”  They hear everything…even when you are opening up that snack wrapper on the other side of the house, your doxie is at your feet in seconds.

Your Dachshund is on duty all the time. Sudden noises or movements will automatically sound the dachshund alarm.

Dachshunds love to hang out with their family members.  Dogs are pack animals, so they don’t like being left alone.

If your dog doesn’t get enough mental and physical stimulation every day, they get bored and they bark.

My dachshunds get really excited when we have guests over to visit.  They bark, run around the house, and wag their tails.

Dachshunds also will bark when they are playing.  When my kids run around the backyard, little Eko wants to join in too.  He runs and barks very loudly.  My husband believes that Eko thinks he is one of the kids and doesn’t want to be left out. Doxies will bark if they demand attention.  When my husband walks in a room, Eko always greets him with excitement and a small woof.  He wants my husband to pick him up and get some cuddles.  My husband is clearly Eko’s favorite human, so he gets this cuddle request quite often.

Learn more: How Do Dachshunds Choose Their Favorite Person?

Dachshunds with Separation Anxiety will bark constantly when left alone.  This type of barking is compulsive and carries on for a long time.  Dogs who bark constantly may be doing so out of fear, anxiety, or frustration.

Often times, dachshunds with separation anxiety become destructive and spiteful.  They are not happy when they are left alone.

Your dachshund may be barking because of a medical issue.  If they have a brain disease, this may cause excessive barking.  Have your dachshund routinely checked by the vet to see if a disease or illness could be causing your dog to bark constantly.

If your poor doxie was bitten by a nasty horse fly or stung by a wasp, they may be barking because they are in pain.

If you have an older, senior-aged dachshund who barks for no reason, they could be developing canine dementia.  Read more on Dementia in Dogs by Spruce Pets.

Doxies that haven’t had enough exposure to the outside world will bark at everything that moves.  Not having enough experience with other people or dogs will make your dachshund more anxious around strangers.

How To Stop Excessive Barking

Dachshunds are easily distracted by the sights, sounds, and smells of the world. In order to stop the barking, we need to get our dog’s attention off of the distraction and re-direct their attention on us.

Dachshunds #1 favorite thing in the world is…FOOD!  Yummy dog treats are a positive incentive that will give your dog a reason to focus on you instead of the barking distraction.

Don’t give positive attention or treats to your dog if they are barking and carrying on. Coddling them and treating them like they are doing something right will give them the wrong message.

Get their attention and only give treats and praise when they are quiet and focused on you.

Dachshunds who have had a good amount of exercise during the day tend to bark a lot less.  Daily walks and playtime are considered physical stimulation, which prevents boredom and helps lower your dog’s anxiety and stress levels.

Take your dachshund on a 20 minute walk before heading out the door for the day. 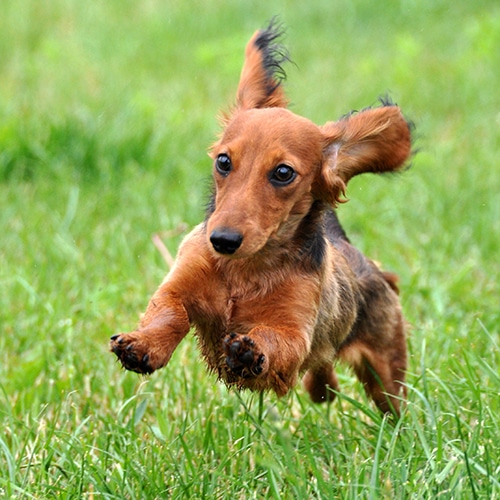 If you work long hours and just don’t have time to take your doxie for a daily walk, get some help.  You can search online for some local dog walkers or doggie day cares in your area.  Hiring some help while you are away can help lower your dog’s anxiety and reduce the barking.

Keeping your Dachshund occupied with Interactive dog toys and puzzles can help them stay mentally stimulated so you don’t have to worry about them getting bored while you are gone.  Dachshunds are hunting hounds.  They love to use their brains to search for hidden items.

Learn More: 7 Signs Your Dachshund is Bored (How to Fix It)

In order to fix the excessive barking issue, I believe giving your doxie some positive association with people helps a lot.

When you have a friend over to visit, have them greet and treat your Dachshund.

People who give dog treats and positive praise will let your Dachshund know that they don’t need to set off the panic alarm.  Expose your Dachshund to a variety of sounds outside and inside the house.  This will help them get used to changes in their environment so they don’t freak out and bark.

Learn More: How To Socialize Your Dachshund

If your dachshund doesn’t stop barking for treats or toys (he may not be a dachshund, ha ha) then you need to take a cool down break.

When Eko gets out of hand with his barking, I put him in his play pen.  He has a nice warm dog bed and some chew toys to keep him occupied.

I don’t use his playpen as a punishment.  It is Eko’s safe space.  It takes him away from the distractions that are causing him to bark and helping him find quiet time.

Stop the Bark Before It Happens

Most dachshunds will have a known trigger that makes them bark on cue.

When you notice your dachshund start to perk up and ready to bark, redirect their attention on you and give them a reward for their obedience.

If your pup continues to get excited or protective when they spot someone on a walk, turn them around and go the other way. You are taking them away from the barking trigger and getting them focused on something else.

CBD oil for dogs can help with that obsessive barking as well.  Make sure it is high quality and check with your vet before trying it out.

#1 Find a quiet place in your home to start your quiet training.  You want your dog’s focus on you only, so isolate yourselves from any distractions.

#2 When your dachshund is quiet, say “quiet” in a firm and calm voice (don’t shout).  If they are quiet, reward them with a small treat.  Repeat this a few times on a daily basis. Pretty easy, right?

#3 Now it’s time for the real test…try the quiet command when your dog is barking at something.

Say “Quiet” in a calm voice (don’t yell), if they look at you and stay quiet, if only for a split second, praise and reward them.

Don’t reward while they are barking.

You want them to stop the bark, and look at you without making a sound.  This helps your dog associate being quiet with yummy treats.  Practice this every time your Dachshund starts barking.

#4 Keep in mind, when your dog is barking at someone outside your home, you can let them bark a couple of times.  Approach the situation, say “Quiet,” then lead your dog away from the window or door where they see the distraction.

You are allowing them to bark to let you know there is someone outside, acknowledging their alarm, then leading them away to stop the bark from continuing.

Here is a nice visual demonstration of this training on YouTube from Nigel Reed: How to Stop Your Dog Barking At Visitors. 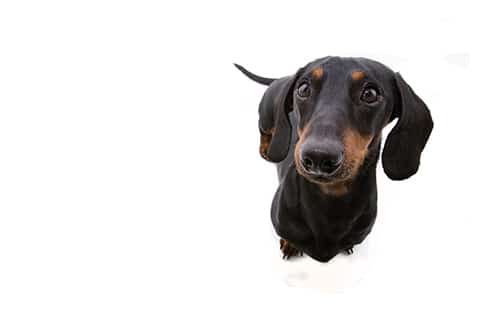 If your pup barks at people while you are on a walk, bring along some dog treats to take their attention off of the people and get them to pay attention to you.  When you notice your dog start to perk up, put that treat by the nose and say “Quiet.”

Overtime, your dog will see the people coming, and look at you for their treat.

Some dogs prefer to sit and have their treat in “Quiet” mode, while others prefer to keep walking and eat on the go.  Either way works fine.  Praise and treat your dog for not barking when people pass by.

What You Shouldn’t Do

Anti-Bark Products: Avoid using shock or citronella spray collars on your dachshunds. These methods are a punishment towards bad behavior, and often times cause more anxiety and won’t actually stop them from barking.

Yelling: Loudly scolding your dog won’t help either.  Raising your voice at your dog gives them the attention that they want and they will bark even more.

Stick with positive reward and praise methods for training.  They are much more effective.

Talk to your vet about your doxie’s barking issue, they may have an anti-anxiety medication that can help keep your dog calm.  Your vet may also recommend a professional dog trainer that can give you a hand.  Here is a nice post on getting some dog behavioral help from ASPCA.

How Do You Stop Your Dachshund From Barking?  Let Us Know Below.

Up Next: Reasons Why You Should Wait Before Fixing Your Dachshund 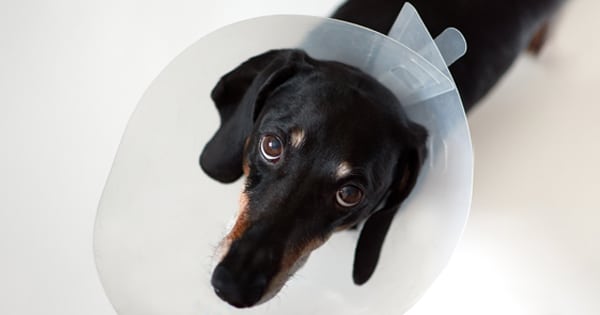 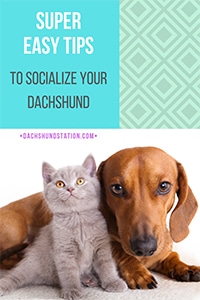